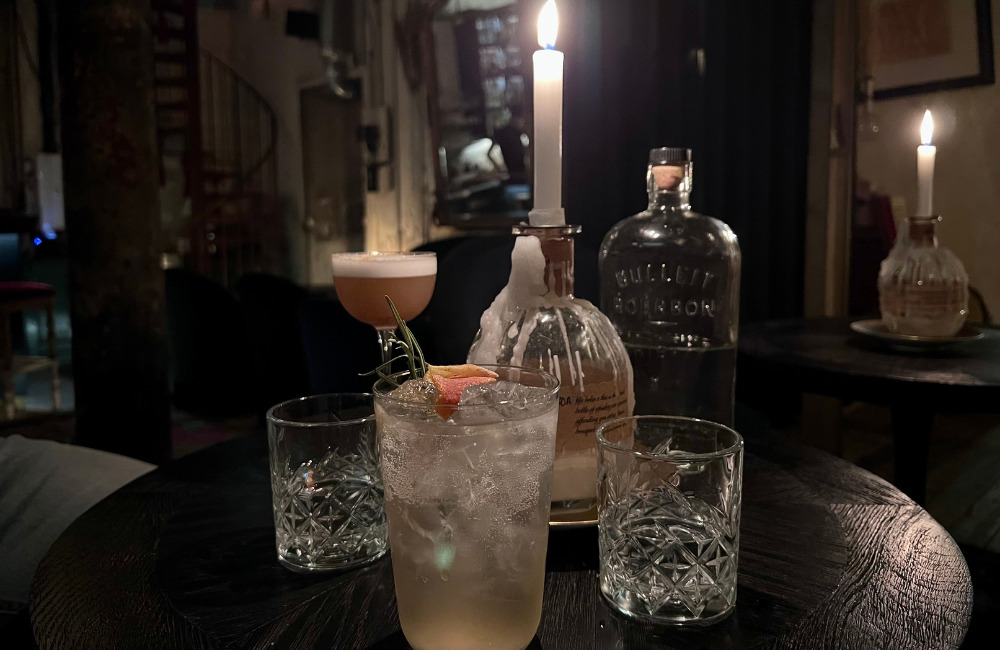 7 Best Speakeasy Bars in Paris for your Paris Agenda

Speak Easy Paris: Last updated on the 16th of November 2022 by Lena

Did you hear about the speakeasy bars in Paris, and now you wonder where to find these hidden Bars in Paris? Then this post is precisely what you need.

I had the pleasure to enjoy a few of Paris secret bars already, and today, I am filling you in. In this article, I will tell you where to find the best speakeasy bars in Paris and how to get access.

What is a speakeasy bar?

Prohibition was the time when it was illegal to make, sell or transport booze. That – of course – did not mean that folks stayed sober, they just had to do it in secret. And that’s when secret bars were booming, a so-called speakeasy. Bars are hidden behind an innocent-looking door, in private apartments, behind camouflaged walls, or in cellars. Invisible and discrete from the outside, and often only accessible with a password.

So far, prohibition in the US in the 1920s and 30s.  Europe was – despite some attempts here and there – never really into that. At least not in the abstinence part. Because during the past years, we got really fond of the idea of adding some adventure and secrecy to our night life program. That’s why speakeasies bars became super popular in Paris.

Here are a few articles that you surely will love:

Speakeasy in Paris: the best hidden Bars in Paris

Prohibition-style bars as a concept. Usually, a concept on the more exclusive side of things. Speakeasies are – unless you’re very fortunate concerning funds – not the place for a quick pint after job (you likely won’t get a pint there anyway). Or if you are going out on a super tight budget in Paris.

It’s not craaaazy expensive, but prices in the hidden bars in Paris are above average. However, you can be sure not to get fobbed off with an average Caipirinha.

A speakeasy bar in Paris is not an average bar anyway, but rather a pretty cool experience! And: A great activity if you are looking for things to do in Paris at night.

Speakeasies in Paris typically mean high-quality spirits and cocktails. They are among the best cocktail bars in Paris. The bartenders know what they are doing: homemade bitters, best liquors, and fancy and eccentric creations. Or did you ever try a cocktail where bell pepper or a smoked infusion made an appearance?

Anyway, I went on a speakeasy tour through Paris the other day and visited 4 hidden bars that I will present to you in this article.

Edit November 2022: Since I wrote this article, I visited a few more Paris Speakeasy bars that you will find at the end.

PS: if you are up to knowing more about secret tips and hidden gems in Paris – Check out this massive collection of unusual things to do in Paris!

The Moonshiner was my first stop for the evening. From the Bastille Metro station, it’s a 5-minute walk, or 7 if you walk past the bar without realizing it.

Well, I took that as a good sign. After double-checking the address, I found myself in front of a Pizzeria, and -as expected – without even a hint of a bar. Just a brown door at the back of the shop. It felt a bit awkward to just walk through, and I was worried to end up in their warehouse, with an angry employee following and asking what the heck I think I was doing… And then I would have to buy a Pizza just to cover my embarrassment.

Anyway. Behind the brown door was of course no storage, but a very decent bar.

Greeted by the barman, I took a seat at the bar. To be honest, it’s always been my favorite place. I love to see how they mix drinks, and I am awed by how smoothly it goes! The bar looks just about like you would imagine a prohibition-style bar: dim light, comfortable armchairs, vintage wallpapers, and I was right back in New Orleans in 1930.

By the way, Moonshiner is actually the name of the illicitly distilled booze – often whiskey –  from back in the days! Not surprising then that the Moonshiner has a lot of different whiskys on its menu, and cocktail names are also inspired by the epoch.

Next stop: Mexico. When I reached the address where La Mezcaleria was supposed to be, I did find a Mexican Taquería (El Vecino) and a Peruvian restaurant but, as expected, no sign of the Mezcaleria. But I love Tacos, so I took the occasion to get a bite. The Tacos were good, not outstanding but decent and I enjoyed it.

While eating outside on their patio, I could see quite some people folks entering the Hotel next door, and eventually, I decided just to tag along.

As the name hints, this Parisian speakeasy is specialized in Mezcal and even though I am not overly fond of it, the cocktails were remarkable. I wouldn’t have imagined it, but the smoky flavor of Mezcal was the cherry on the cake of the 2 cocktails I tasted.

After a stroll through the nightly Paris and crossing Place de la République, I arrived at my 3rd stop for the night.  I found the Lavomatic on the first try – maybe because it was the only launderette around, but probably also because it’s the only Laundry I’ve ever seen with a bouncer.

Quickened by my confident walk-up to the Moonshiner, I headed straight into the Launderette. But surprise, I got held back by the bouncer. He spoke something in his walkie-talkie and only after quick confirmation I could step in.

Completely unrelated fun fact: the French call a walkie-talkie a talkie-walkie, it cracks me up every time.

When stepping in, it became a bit awkward. Obviously, I had no laundry to wash, yet I was standing in a Launderette, all dressed up and with nowhere to go.

I won’t share how to open the door to the secret passage, but I eventually got it. I walked up a very narrow and pitch-black staircase and arrived in something like a small apartment living room, with framed pictures, books, and pillows.

Folks were sitting on swings and detergent boxes, sipping cocktails, and wine. Even though it’s a tiny place, they do have a balcony for smokers, and they also serve food! (everything at quite reasonable prices!

After laundry, it’s time for groceries! The 4th bar is called L’Épicier and is… hidden behind a grocery store! (That makes more sense if you’d know that épicierie means actually grocery store in French).

It follows more or less the same principle as the lavomatic – not surprising, both are run by the same founders. L’Épicier seems to be a normal late-night grocery store. Just like that kind of store you find on every 2nd street in Paris.

However, if you know the password, or better – if you know which item in the store you have to move – a secret door opens .. et voilà!

A nice detail is, that most Épiceries in Paris are run by folks with northern African origins and the bar hidden behind the store is just reflecting those oriental roots. Colorful Moroccan lanterns, tapestry and carpets, pillows, and signature cocktails based on mint tea and oriental spices.

The interior is very cozy and the atmosphere warm – we were again greeted by very friendly staff and allocated a seat. En par with the oriental flair, you sit on low tables, but they as well have a few swings and armchairs. And they serve food – Mezze obviously!

This is the latest speakeasy bar in Paris I went to, and it was one of the coolest hidden bars. It’s in the basement of Hotel Normandie near the Louvre.

The style of this bar best described as a construction site, that meets opium bar, which meets the belle-epoche. It’s certainly a unique bar in Paris, that you must have seen with your own eyes. It is also sparked with a lot of intimacy, so perfect for a romantic night in Paris.

To enter the bar, you need to find the door behind a mirror and then carefully walk down a spiral staircase to the basement of the Hotel.

6 Rue Vivienne – In the Galerie Vivienne

The DANICO bar is another bar that is absolutely worth to get a drink at. Especially if you are interested in tasting one of the world’s best cocktails. I am not overdoing it here – DANICO made it in fact on the list of the 100 world best Cocktail Bars.

This hidden bar is not as adventurously hidden as some other Paris speak easy bars. But you still need to know it’s there to get into. It’s in the back of the Pizzeria DAROCO, which is excellent, by the way.

Le Syndicat is a hidden bar in Paris because its unassuming frontage doesn’t give away the gem that lies within. It’s basically just a door that is not even very appealing to go through.

Once inside, you’ll find a simple space with a list of cocktails that will make your head spin. The young and creative team behind the bar knows their stuff when it comes to French spirits, and they’re passionate about using only the best ingredients, all of which are sourced from France. From the wine and cheese (yes!) to the fruits and vegetables, everything is assembled with care and attention to detail.

Where to find the secret bars in Paris?

The secret bars are a bit scattered over Paris, but the 4 bars from this article can be easily done in one evening without taking public transport. Big plus: you see a bit of Paris.

If you need any clarification about Paris or need some advice and how to plan your trip, don’t hesitate to reach out!  I created a Facebook group for this matter, and I am available to help you out! Click here to join the Salut from Paris Facebook group!

PS: Check out these posts, they will help you plan your trip to Paris

Keep this post for future trips and weekends! Pin it! (Also check our bar and restaurant guides!)