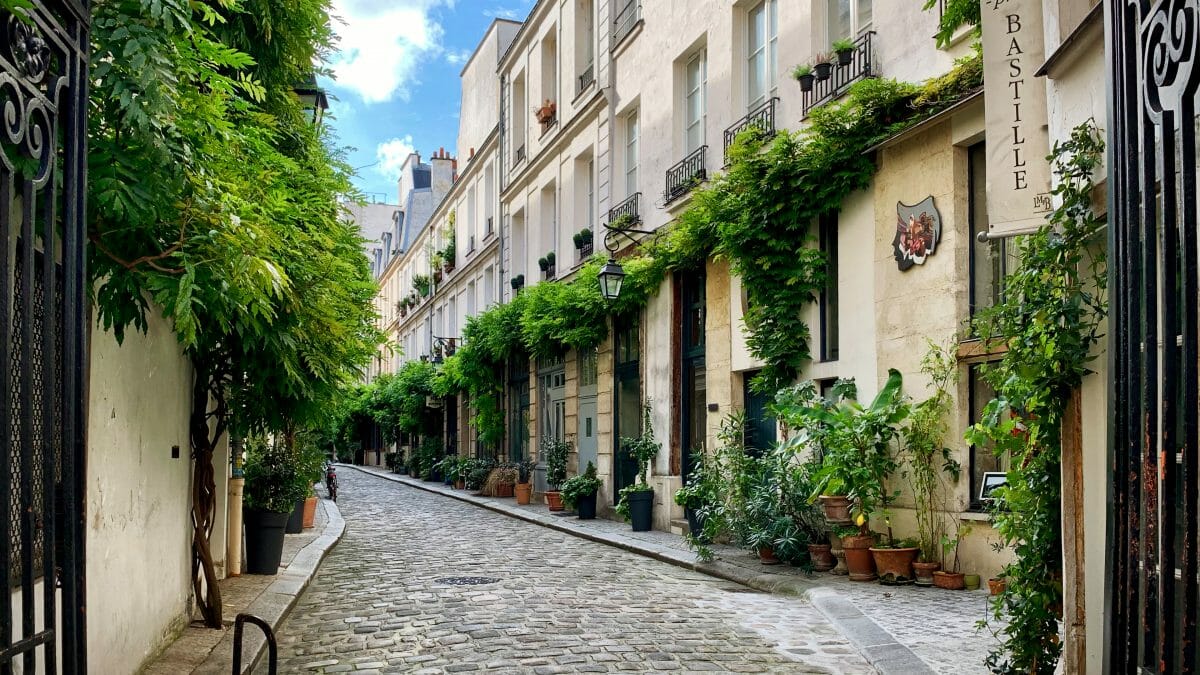 These are the cutest streets in Paris!

This site contains affiliate links. We may receive a commission for purchases made through these links - this comes without extra cost for you, but with a lot of appreciation from me!

Thinking about the Parisian streets, you think about 2 scenes: magnificent and imposing Haussmann architecture, broad illuminated boulevards, and fancy storefronts, but also about narrow, cobblestone alleys with cute sidewalk cafés and a small-town charm that is hard to beat.

While it’s easy to find yourself amidst the impressive Haussmann buildings as the Baron left his architectural fingerprint all over Paris, it requires a bit of research to know where to discover the cutest streets of Paris.

One can simply not name Rue Crémieux when looking for the prettiest streets of Paris. Well, just look at it!

It’s one of the most Instagrammable places in Paris and that justifiably so! The colorful houses lined up on a pedestrian street, the plants, the cobblestones, and even though they are only 2 or 3-floor houses, they still adopt the Mansard roofs that are so typical for Paris!

You might think that Rue Crémieux is located in a calm part of Paris, but not at all! It’s just next to busy Gare du Lyon and Bastille!

But don’t turn around when you arrived at the end of this lane!  Turn right and then left, and you will find yourself in front of one of the most beautiful portals of Paris! It’s an Art-Nouveau inspired gate made of wood and iron, designed by Alexandre Mezei! The Hungarian artist lived there back in the days and installed the portal in 1959.

I would be surprised if you’d find the Square des Peupliers by accident. Firstly, it is well hidden between characterless apartment buildings, but it’s also buried deep in the 13th arrondissement, a pretty non-touristic area of Paris, where almost no Paris visitor ever goes.

And that’s really a pity if you’d ask me. Already the Butte-aux-Cailles is worth a trip. The hilltop neighborhood it’s somewhat of an insider tip if you are not from Paris, it has plenty of nice bars and loads of interesting street art. The 13th is as well known to be the Asian quarter of Paris and if you are craving some authentic Chinese, Vietnamese or Thai food, here’s where you find it.

Tip: Try the Banh-Mi at Tang Gourmet at Place d’Italie. You won’t find any better!

Left hand of the Parc Montsouris are a few streets that definitely should be on your agenda if you are looking for the cutest streets in Paris. All parallel to each other they are easily visited in a bundle, but the Square de Montsouris is without a doubt the prettiest one. Most trees and rose bushes, the nicest houses, and of course the cobblestones … I heard at one point that Scarlet Johansson lived in the area when she had her residence in Paris. No proof, just rumors but given the beauty of the area, it wouldn’t surprise me.

When you are around, have also a walk in the Parc Montsouris and watch out for the wild parrots! 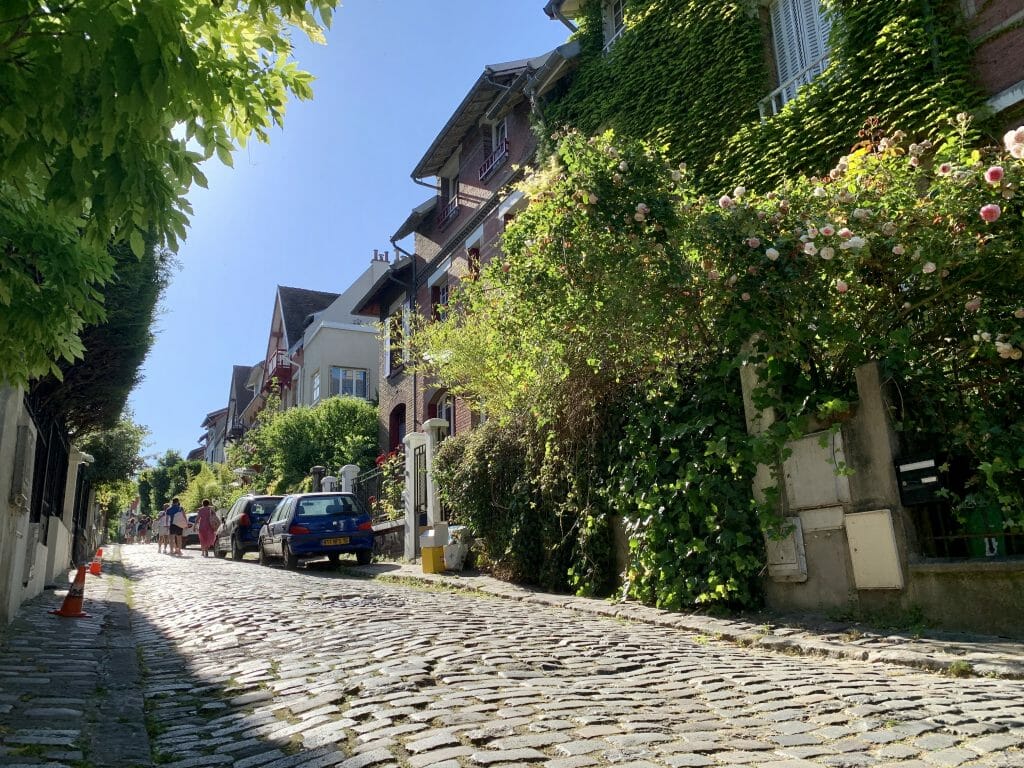 Anyway – this street at the foot of Montmartre is known to be the prettiest street in Paris.  Thus, if you set off to look for the prettiest streets of Paris, the Rue de l’Abreuvoir is the bare minimum you should cover.  But the convenient location in Montmartre, and the proximity to popular tourist sites like the Sacre Coeur and the Maison Rose (both in the picture below), are making this street very accessible in any case.

Ok, to be fair, the street is not really one of the prettiest streets in Paris, but it has one of the nicest views of the Eiffel Tower and therefore well worth the visit and deserves to be on this list.

Most pictures of the Eiffel Tower are taken from the Trocadero and showing the spacious Champs de Mars with the tower in the middle. You easily get the impression that Paris’  – or France’s really – most important landmark stands in the middle of nowhere, isolated from the rest of the city. While in fact, the Eiffel Tower is standing basically in the backyard of apartment buildings. Very expensive ones though.

This street is hard to miss as it is literally in the center of Paris – just a few meters away from Notre Dame, St. Michel, and the beautiful bookstore Shakespeare & Company.

Odette, the Pâtisserie that you can see below in the picture has not only a very appealing storefront, but it’s also a great to address to taste the famous “choux”. A puff pastry filled with all sorts of different flavored creams and really yummy.

By the way, you find the “Choux” and many more must-try food items in our Paris food guide!

However, the Rue Galande is a typical street within the Latin Quarter. An area was mainly untouched by Baron Haussmann who more or less rebuilt big parts of Paris in the 18th century. Hence, I am proposing to take a walk and discover more of this rather old part of Paris.

I know this is probably very niche but if you like the Rocky Horror Picture Show – the Studio Galande in this very street has animated screenings every week, and it’s pretty fun! Don’t forget to bring the rice! (and an umbrella) 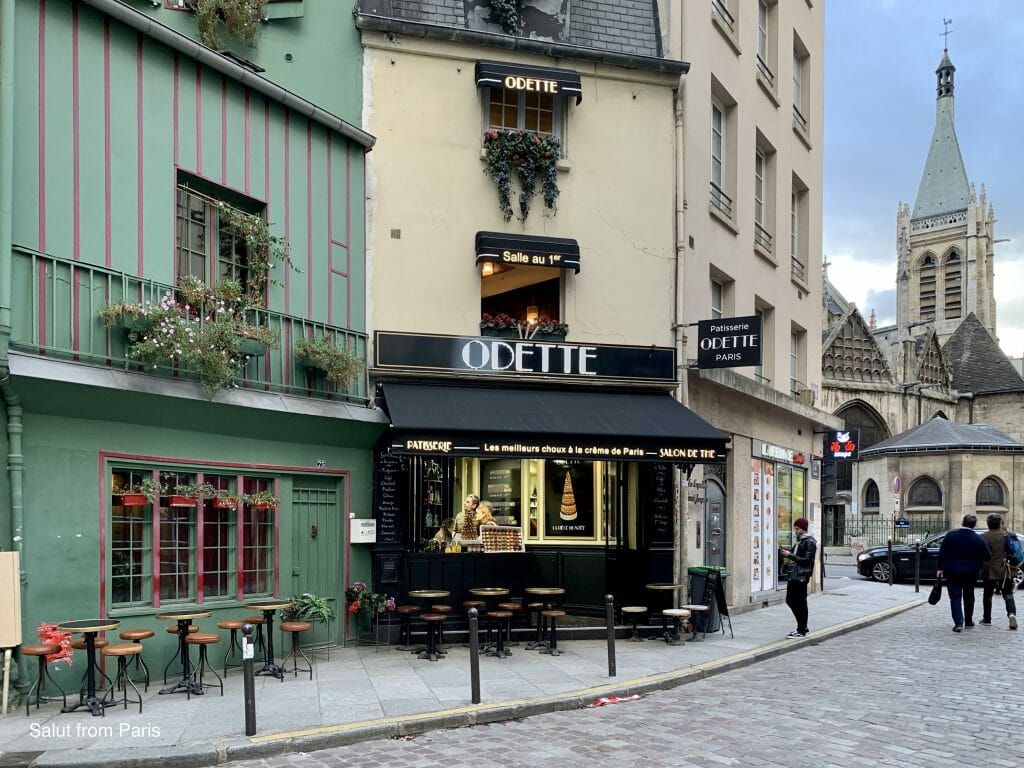 The very pretty Cour Damoye is once again a dreamy and remote-looking alley that in fact lays in the middle of all the buzz. This time: Bastille. Literally. The entrance to this hidden gem lays between two restaurants just facing the Bastille, a little passage that you easily oversee if you don’t know it’s there.

Are there more cute street that you think are worth to visit? Leave a comment below!

The Best French Pharmacy Products 2021- and where to buy them!

The top 10 tourist spots – and what you should do instead!

Scams in Paris! How to avoid the most common cons

Père Lachaise Cemetery – and why you should visit! 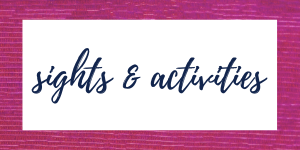 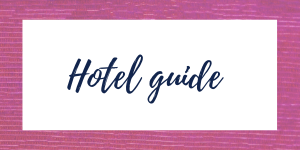 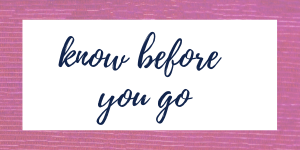